MBC and its “in-depth” reporting scares the Korean public even further about mad cow, claiming that 94-percent of Koreans have a “special” gene that makes them more susceptible to mad cow disease.

Korean media tries to connect it to beef imports

Korea slow to qualify itself as mad-cow-free

Matt’s (Gusts of Popular Feeling) 2005 trip to the Gwangju commemoration vs. Brian’s (Brian in Jeollanam-do) trip. Hint: a lot more pictures of American flags and cows.

Turns out much of the arguments in the TV show that scared Koreans about U.S. beef were faked. But correct the errors and apologize? Are you nuts?

Korean Supermarkets Won’t Sell US Beef. Time To Be a Dick.

From Jeju to Paju… (Gusts of Popular Feeling)

The Beef Is Almost Done… (Metropolitician)

Mike says the protests are hitting their peak, and it’ll all be over in 4-6 weeks

NYT: Beef Agreement Near, No Beef Over 30 Mos.

They Even Ambushed DMC With Mad Cow!

Homever Store in Hot Water for Labeling US Beef as Australian

Popularity of US Beef In Korea Grows

Some have solved it by removing beef items from their menus

That’s one way to handle protestors. (the stabbing)

US Beef Accounts for Nearly Half of Beef Imports

Korean Negotiator: FTA Renegotiation Would Harm Confidence in US

The Return of Dokdo

Protesters marched on the Japanese embassy

No Banknote Would Be Complete Without Dokdo

How Not to Protest the Military (Korea Beat)

Too much cramming of Korean culture in one space mission?

Yi So-yeon is back in Korea

Hey Korea, You May Miss Being a “Developing” Country…

More on the Korean Won (Iceberg)

Korean Won Biggest Loser to the US Dollar

The ratio of debt to disposable income has risen sharply, especially debt to non-bank lenders, which charge higher rates than banks.

The Business of Korea is Corruption Business

Hyundai Chairman “pays” for his Crimes

I do not think it’s been mentioned here, but one of the chairmen of the Seoul City Council was arrested for bribery recently. I do not think that many would blame me for passing my glazed eyes over the scandal. However the story did give cause for coffee to erupt out of my nose this morning. First is former-chairman Kim Gui-Hwan’s Clintonian defense:

“I just gave them gifts in accordance with habitual practice,” Kim said. “I did not break election laws.”

That they have to demonstrate they’re not recycling side dishes is not comforting.

The painting that the back of the 1,000 won bill is based on is a forgery.

I Guess She Got an “A” in Plagiarism

Foreigners Can Use Korean-Only Sites Now?

Korean Wii Sucks because of what Koreans did to the DS?

Sex and the City

What Do Korean Tourists Do In Uzbekistan?

Sex offender at it again.
Well, That Was Fast

“The love children of the Korean Wave”

So, Six Pot-Smoking English Teachers, a Korean Drug Dealer and an Illegal African Alien Walk into a Bar…

It’s whitey season again in Daejeon. (B in J)

Immigration crackdown ends (or “When the cat’s away, the mice will play”)

Police have arrested 8,035 violators of the Immigration Law during a 70-day crackdown started April 1. They have detained 148 and booked 7,887 without physical detention, the National Police Agency said Monday.

Chinese nationals made up the largest portion of the foreigners arrested, totaling 2,744. The most common offence was illegal marriage to obtain Korean citizenship, which made up 45 percent of the total cases.

Other major illegal activities include document forgery for visa application, which accounted for 14.5 percent. Unqualified native English and Chinese-speakers made up 8.3 percent. Most of them entered Korea on tourism or student visas, which do not allow them to work here.

“Due to the English education fever here, a lot of foreigners, especially from English-speaking countries, are often found working illegally here without the proper visa,” a police official said.

Man beats up elementary school student in the elevator . . .on tape.

Korean Cops: “Raped? Not Our Job”

How Not to Deal With a Problem

On the 16th the Suncheon Police Department in Jeollanam-do applied for an arrest warrant for a 42-year old Mr. Jeong on suspicion of going to a police station and shouting at a female police officer whom he held a grudge against for arresting him. He did this while wearing only his underwear.

According to police, at approximately 3:10 PM on the 15th Mr. Jeong went to the south entrance of the station and threatened the officer, A, saying, “I was in prison because of you. I’m going to kill you,” for 90 minutes while wearing only underwear.

In July of last year Mr. Jeong was arrested for doing the same while drunk and naked, and was recently released from prison.

Korean Cops Not Taken Seriously By All

The “negotiations” fell through, so it’s being investigated.

Police in Cheonju have asked for an arrest warrant for a 50-year-old man they believe tried to rape his mother-in-law while in drag.

“We would have ignored the case if he had not broken the machine. But we had no choice but to report it to police so as to get the eight million won needed to repair the ATM,” said a bank official.

A man was found ELEVEN MONTHS after hanging himself.

And The Prize Goes To… (CB)

Student Punished for Having Brown Hair

Elementary Teacher to Student: “Thank Me For Beating You”

In Korea, 25% of International School Students Are Koreans!

New Education Secretary appointee Cheong Jean-gon in trouble, guess why? (B in J)

Well, I Can Sleep Better At Night Knowing Our Lawmakers Are Monitoring Paraguayan Textbooks (Marmot)

English Teacher Gets 10 Months in the Slammer (HA! Not a foreign English teacher.)

You call that a slide?

Adoption Abused for Enrollment in Schools at US Military Camp

Man, TOSS English is really stickin’ it to parents to just have their kids sit in front of a DVD player.

The Colors of Seoul

The Power of Branding « Hermit Hideaways

No Chinatown for You!

Take It To City Hall, Umm, Before It Disappears

“Kickin’ It in Geumchon (Kumchon)”

Coreana wants the ads removed from Youtube and removes them.

Is Rokon Off? (Korea Pop Wars)

Her name: 혜나 or “Hye-na” in Korean, is being written on the posters in a way that could cause some, uh, confusion, if she ever goes international.

Does anybody else here spot the problem?

I’ve attracted the ire of Korean netizen bullies. (B in J)

Dong-A Ilbo: Xenophobia on the Rise

Piece from Adam Walsh in the Korea Times

I managed to discover that it is only E-2 and E-6 visas that require the test. When I asked why this was the case, he informed me that it was to protect the children. He then said that I could leave the country if I wanted or phone my embassy.

After Mr. Choi hung up on me, I thought some more about the fairness of the rule. The E-6 visa is for entertainers, not teachers. I don’t understand the similarities that would group both the E-2 and E-6 visas together. (Galbijim edit: Because the Russian whores who work at room salons and sleep with Korean men, are sponsored on E-6 visas.)

More difficulties for Canadian English teachers in Korea.
Some interesting remarks from the Canadian Embassy on the controversial VSS required for E-2s.

Special: A Mother’s Worst Nightmare – The Tale of Michael White

Fundraiser for injured teacher in Suncheon.

Elyse Sewell and the world of bulemic modeling roommates in Korea

As has Busan Mike

There’s a New Blog in Town

“The Hub of Sparkle” KoreaSparkle.com

Who Dares to Eat This Hamburger?

A Korean blogger and online artist has created some characters to represent “the outrages committed by foreign teachers in Korea after they’ve smoked pot and drank.”

Who the fuck is doing the cartoons over there?

Yeah, okay, the guy was extreme, but on what planet is this Korea Times cartoon titled “Austria’s Far-Right Leader Joerg Haider Died at Car Crash” appropriate?

Who is more full of it?

“TOO DRUNK TO [email protected]#$” (from Brian in Jeollanam-do) 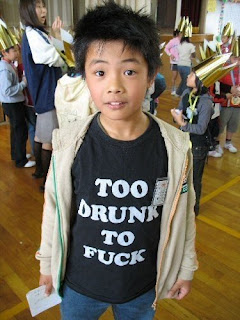 Hard, On English
A diary from a while back (September 2007) from Stafford at The Chosun Bimbo.

snapshot #10: why i love korea